Here is Caetano with Toni Costa on Trem das Cores. This celestial song invokes, among other things, “the blue silk of the paper in which the apple is wrapped” and “that blue which is a pure memory of a place.”

This post is going to be in Spanish, so if you do not read that exalted language, you are invited instead to read It’s Not You, It’s Your Apartment, on the horrors of dating poor housekeepers. Do not overlook the comments thread.

More serious English language entertainment can be found in the abstracts of two articles I would love to read, but must not at this time as they are too far afield to cite: Breckman on “The Subject of the Imaginary” and Majluf on “Racial Ambiguity in Peruvian Visual Culture.” Nobody should miss the amazing images of racial ambiguity which accompany Majluf’s abstract.

Meanwhile, Ulises Juan Zevallos-Aguilar has useful information and makes some key points which will, nevertheless, be esoteric to most readers. Qui potest capere capiat.

The Archbishop of Lima and his conservative wing of the Church are attempting to intervene in academic affairs at the Catholic University of Peru, which maintains the Riva-Agüero archives. 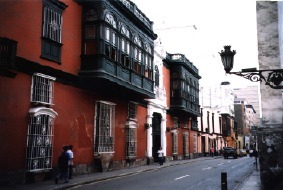 Peru21 has an editorial about this. There are elements of the backstory, which involves in part the ownership of the archives, in El Comercio, Caretas, and 24 Horas Libre. The University has issued a statement on the matter, in which it defends its right to autonomy and to its property, namely, the papers willed to it by Riva-Agüero.

Salomón Lerner, Rector of the PUC-P until his recent retirement, was also President of the Truth and Reconciliation Commission which investigated the atrocities committed in the country’s dirty war against the Shining Path. Juan Luis Cipriani, then Archbishop of Ayacucho, now Archbishop of Lima, and always an Opus Dei member, said famously that “human rights [were] bollocks.”

As a graduate student I did some research at the Riva-Agüero Institute, a lovely old house with a beautiful library. The first article I ever published was written there, and I came up with my dissertation concept there. I really liked the faculty of the Catholic University of Peru, and of the UNMSM. I have so many notes from that research trip that I have not yet used them all – although I will, in the end.

I am using some of them for the writing project I started today. I am having a good time. Life is very easy if you claim your true nature, I always notice. In honor of this we will now contemplate the balcony of the Casa del Oidor, on the Plaza de Armas in Lima, in another beautiful photograph by Daniel Duguay.

Also today I told one of my older colleagues, a Minnesotan, that I had just been in The Cities. “How marvelous, a symposium on Bob Dylan! When I was an undergraduate my friend had a coffeehouse called the Ten O’Clock Scholar. He always insisted I come when Bob Zimmerman was playing!”

On the street I saw many billboards and bumper stickers. If it is “a child, not a choice” then why is the denial of support for said child justified with “it was your choice to have this child?”

The Nation, a publication the assiduous reader knows I follow with some regularity, has sent me this mail:

Gary Tyler, black, now aged 48, is serving a life prison sentence in Louisiana State Penitentiary. He was convicted in 1975 for the murder of 13-year-old Timothy Weber, a white schoolboy who was shot during an attack by a white mob on a school bus filled with black students. Tyler, who was 16 at the time of the incident, has consistently denied involvement in the crime. Since his trial, serious doubts have been raised about the evidence on which he was convicted, according to Amnesty International.

As Bob Hébert wrote in the first of a series of three New York Times‘ columns on Tyler, “That single shot in this rural town about 25 miles up the Mississippi River from New Orleans set in motion a tale of appalling injustice that has lasted to the present day.” Hébert’s reporting has helped revive interest in the case and and given the miscarriage of justice new visibility.

Building on this momentum, Nation sportswriter Dave Zirin recently contacted people from the world of sports to ask if they would stand with Tyler at this critical time. And they have responded.

This is the text of the athletes’ letter to Governor Kathleen Blanco:

We, the undersigned members of the sports community, call upon you, in the name of justice and racial reconciliation, to pardon Gary Tyler and free him from Angola prison. Gary is an innocent man who has spent 32 of his 48 years on earth behind bars for a crime he did not commit. Gary’s life has been destroyed because of racial hysteria and that peculiar brand of police work known internationally as “Southern Justice.”

As you are undoubtedly aware, New York Times columnist Bob Hébert has spent the last month exposing the terrifying truth behind Gary’s conviction. In 1975, Gary Tyler, an African-American teenager, was convicted by an all-white jury for the murder of Timothy Weber, a thirteen-year-old white youth. Weber was shot and killed during a busing riot where 200 whites attacked Gary’s school bus. Weber’s death quite understandably sent shock waves across the state. The police needed a killer. They chose Gary and his nightmare officially began. Gary’s mother detailed to Hébert the sounds of listening to deputies at the police station savagely whipping her son, while they blocked her from entering the room. “They beat Gary so bad,” she said. “My poor child. I couldn’t do nothing.” Every witness who identified Gary as the shooter has since recanted and alleged police intimidation. The gun supposedly used on that day has disappeared.

In the mid-1970s, Gary’s case mobilized thousands across the country for his freedom and led Amnesty International to declare him a “political prisoner.” Denied a fair trial 32 years ago, imprisoned for life for a crime he did not commit–we call upon you to free Gary Tyler now.

You, too, can write Governor Kathleen Blanco, asking for Gary Tyler’s immediate release.

The letters will help, although Blanco is apparently not empowered to act alone upon this matter.

Here are two sentences from Lakshmi Chaudhry: The problem isn’t that we are more sexist than racist as a society. It’s that race and gender are far too often pitted against each other, and one can be used to justify sins against the other. A sentence from me is that the point of understanding ‘intersectionality’, multiple oppression, and so on is not to enter into a sterile competition about who is the most oppressed.

When the invocation of ‘intersectionality’ in fact serves to pit categories like race, gender, sexual orientation, nationality, and class against each other, as opposed to show how they work together, or when it is used as a mechanism through which to assert power over the next person, it becomes a tool of the Right.

Country Joe and the Fish

This is Country Joe McDonald on the I Feel Like I’m Fixin’ to Die Rag, at Woodstock 1969. We should be singing along now.

My youngest brother insists once again that we contemplate standup comedy from Brazil – in drag! This character is called Granny Arlinda. If you like her, or even if you do not, you should get wilder yet and meet Miss Edith.

The São Paulo press is talking about Terça Insana, which has created over 500 original characters to satirize life in the city and its environs, its inhabitants and their quirks.

It is difficult to live in Brazil, but more difficult, perhaps, to live in Bangladesh. Our featured post for today is Tasneem Khalil’s, on events in Modhupur. It is very important. Read it.